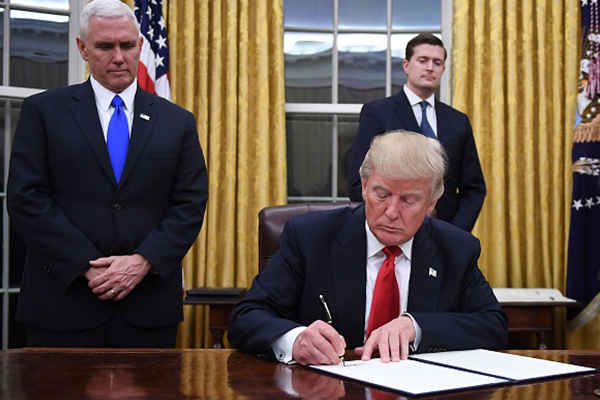 US stock index futures turned bullish after President Donald Trump gave up his threats to block the $900 billion stimulus package voted by Congress last week. He backed the relief bill a few hours ago.

Last week, when trading closed earlier on Thursday, the three benchmark indexes ended slightly higher, except for the S&P 500, which fell 0.2%.

On Sunday, Trump put his signature on a combined stimulus bill worth $2.3 trillion, including the $900 million bill voted by Congress. The relief bill brings back unemployment benefits and prevents a government shutdown.

Trump required Congress to increase the size of direct payments to the unemployed from $600 to $2,000.

Besides the $900 billion voted by Congress, the package includes $1.4 trillion for funding government agencies. If Trump hadn’t signed the bill, the federal government shutdown would have started tomorrow.

It is not clear why Trump suddenly backed the stimulus package, but he encountered pressure including from members of his party.

Meanwhile, the pandemic is preventing a rapid economic recovery in the US, as the daily death toll maintains above 3,000, which is the highest since the virus reached the American continent.

At the end of last week, Inovio Pharmaceuticals said that its experimental COVID vaccine was immunogenic in 100% of cases, according to Phase 1 trial. Inovio’s vaccine doesn’t have to be stored at low temperatures like the vaccine produced by Pfizer. Inovio shares rose about 2% on Thursday.

In Asia, stocks are mixed on Monday, though stocks reacted positively to Trump's support for the relief bill.

Markets in Australia and New Zealand are closed for Boxing Day.

At the time of writing, China’s Shanghai Composite is down 0.25%, while the Shenzhen Component has gained 0.10%.

Shares of Alibaba have tumbled over 13%, the most ever, after China’s State Administration for Market Regulation started an investigation into the company over suspected monopolistic behavior. Earlier today, the company increased its share buyback program to $10 billion.

On Sunday, China’s central bank revealed that it had asked payments giant Ant Group, a subsidiary of Alibaba, to give up its lending and other consumer finance services, and focus on its payment operations.

Hong Kong’s Hang Seng Index is down 0.15% after opening higher.

South Korea’s KOSPI is down 0.03% after opening higher.

In Europe, the UK and the EU finally signed a trade deal last week after months of debate. The text was published on Saturday. It includes a 1,246-page trade document, along with agreements on nuclear energy, civil nuclear energy, exchanging classified information, and more.

In the commodity market, oil prices are somewhat bearish as investors are worried about fuel demand amid the worsening pandemic, especially after the UK confirmed that it had two new COVID strains that were more infectious. Still, the decline in oil prices is capped by optimism surrounding the latest stimulus package signed by Trump. WTI is down 0.37%, and Brent has lost 0.47%.

Gold is increasing on the back of the stimulus bill signed by Trump. Still, the metal is retreating from session highs. Gold futures have gained 0.25% to $1,889.

The pound maintains the bullish stance on the Brexit trade deal, although it is declining versus the euro.